November 10, 2021
AOA President Robert C. Layman, O.D., underscores AFOS and AOA support for national practice standards that allow doctors of optometry to operate “at the top of their license and training” and don’t limit veterans’ access to essential eye and vision care. 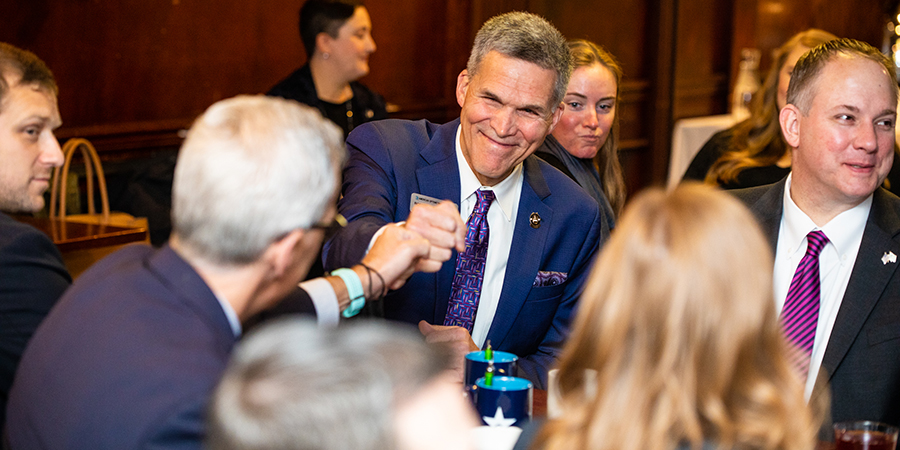 The AOA and the Armed Forces Optometric Society (AFOS) are ramping up their fight to expand access to care, as the Department of Veterans Affairs (VA) advances formal creation of national standards of practice.

At a small Nov. 3 breakfast hosted by HillVets—a nonpartisan veterans advocacy organization—the case by AOA and AFOS was made for expanded veterans’ access to comprehensive care provided by doctors. AOA President Robert C. Layman, O.D., provided opening remarks for the intimate event, which included Secretary of the VA Denis McDonough as the featured guest.

“I’m here representing tens of thousands of doctors of optometry in communities across the country and millions of Americans who rely on local optometrists for their comprehensive eye health and vision care needs,” Dr. Layman said. “AOA is proud to be a longtime supporter of HillVets. We know that good veteran policy means having more veterans in the room, at the table and calling the shots as important policy decisions are being made.

“The AOA and AFOS are honored to serve as the voice for more than 1,000 VA optometrists, who every year provide nearly three-quarters of all veteran eye and vision care,” he added. “We’re also proud of the fact that the vast majority of independent-practice optometrists participate in the Community Care program—I’m a Community Care provider at my Lambertville, Michigan, practice. And we’re proud to support the work the VA is doing to develop and implement comprehensive national standards of practice for its health care workforce—we fully believe that ensuring VA’s health care providers are able to operate at the top of their license and training in states across the country will mean better veteran access to the high-quality care they need, when and where they need it.”

Drawing up a national practice standard at the VA

The VA is currently undertaking an initiative to create national practice standards for the professions that operate under its umbrella, and the AOA and AFOS are working to ensure that the education and abilities of doctors of optometry are reflected and respected to the fullest scope of the care they can deliver under the new standards.

The VA practice standards would specify what services, performed by various professions such as optometry, nursing and physical therapy, are recognized by the VA to provide care across its system, Margaret “Marrie” Read, O.D., a member of the AOA Federal Relations Committee and former AFOS president, said recently. The standards are being prompted by the VA’s decision to modernize its electronic health record (EHR) to promote interoperability, in conjunction with the EHR being launched across the Department of Defense.

“To have these systems be universal across all facilities, regardless of location, the VA is proposing to have each profession set up in its electronic medical record a set of standardized procedures, skills, scope and codes,” Dr. Read, who briefed AOA members at the virtual AOA on Capitol Hill in May, said recently. “Currently, each VA facility has different rules for each profession (besides medical doctors). A set of national practice standards for each health care profession would allow doctors of optometry to carry out the same responsibilities and tasks irrespective of state or facility requirements.”

Said Dr. Read: “AFOS and AOA have expressed their support for developing these new standards. Furthermore, we both have communicated our concern for limiting scope and the detrimental impact it could have on caring for our nation’s veterans.”

AFOS President-elect Greg Smith, O.D., adds, “In order to provide our nation’s veterans the best care and the best access to care, it is imperative that the national standards of practice fully encompass the highest level of education, training and licensure of our doctors of optometry. Only when we allow our doctors to utilize all the treatment options at their disposal can we ensure that our veterans have ready access to the highest level of eye care treatment.

“Uniting the common goals of AFOS, the AOA, VA leadership and Veterans Service Organizations is crucial to achieve the best outcomes for our veterans.”

The VA has long acted as a national health system. As long as doctors were licensed in one state, they were able to practice in any VA facility no matter the location in the country, according to the VA. It operated this way so its professionals would not be “unduly burdened” by state requirements as they moved between VA facilities. The COVID-19 crisis underscored the VA’s practice of moving its health care professionals around the country, quickly, without hindrance of state requirements. During the pandemic, the VA deployed personnel to VA medical facilities, nursing homes and communities across the U.S.

While VA has stated that it needs to create new national standards to help secure and expand access to essential health services, it also asserts that the new standards are needed to help it continue to innovate and modernize. To facilitate the deployment of its new EHR system being developed in conjunction with the Department of Defense, the VA has indicated that unified, nationwide standards are vital to the success of its ongoing efforts to innovate and modernize.

“The reason why this is important is because each health care profession is designated a role in the EHR system that sets forth specific privileges within the EHR that dictate allowed tasks for such profession,” the VA rule in the Federal Register reads. “These tasks include, but are not limited to, dispensing and administrating medications; prescriptive practices; ordering of procedures and diagnostic imaging; and required levels of oversight.”

Fighting back against opposition

The American Medical Association and organized ophthalmology, recognizing the impact the new standards could have on state scope battles, have denounced the process and have called on the VA to align the new standards with the most restrictive state scope of practice for optometry and others. The VA has pushed back on that approach, saying it cannot base the standards on the most restrictive state, as doing so would cause harm to veterans’ access to care in every other state.

Aside from the VA, lawmakers and veteran advocates are pushing back against the effort of organized medicine. So far, leading members of the U.S. House Veterans Affairs Committee and the House Appropriations VA Subcommittee have joined with one of the oldest and most respected national veteran service organizations, the 250,000-member AMVETS, in demanding that the VA make the new standards as broad and inclusive as possible for doctors of optometry.

“AMVETS believes these new national practice standards must be inclusive of all health care services that its health care professionals are authorized to provide in any state,” the organization said in testimony before the U.S. Senate. “Anything short of fully comprehensive practice standards will unnecessarily limit veteran access to care and negatively impact veteran access and health outcomes.”

On Oct. 7, about 35 health care provider organizations—including several nurses groups—sent a letter to the VA in support of national practice standards as long as the standards don’t limit providers’ scope of practice and patients access to care.

The AOA expects the practice standards to be finalized in the coming months. To learn more and to find out how you can help, including by connecting with your members of Congress and urging that they join the AOA, other leading lawmakers, national veterans advocacy groups and their state’s veterans in this fight, please contact advocacy@aoa.org. Learn more on how you can help expand access to needed care.

Princeton, New Jersey-based Avalon Health Economics says plans’ mandated discounts for noncovered services and materials—and limits on laboratory freedom—harmfully distort the vision care market for patients and doctors of optometry. To fight back, the AOA is mobilizing its members and other national doctor groups to educate and inform Congress, now and in lead-up to in-person AOA on Capitol Hill.

AOA President calls advocacy a “privilege” to represent the profession and doctors of optometry, as a plethora of issues are tackled in 2021 and beyond.

Lawmakers are demanding a federal study to assess the need for future legislative or regulatory action against DTC prescription medical device sellers, after the AOA and other advocates spent years citing concerns.