June 22, 2022
The AOA House of Delegates got underway on the second day of Optometry’s Meeting® with reports from the AOA president and executive director on the state of the association. 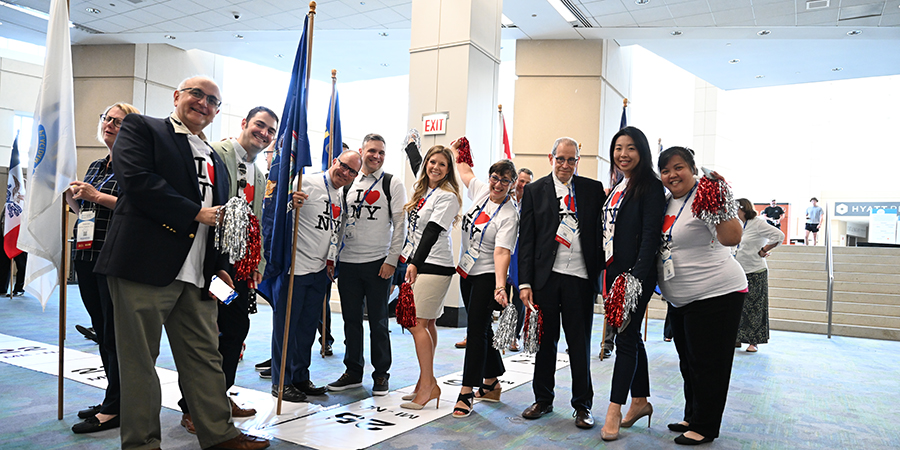 AOA leadership reinforced the invaluable benefits that the AOA delivers to its members on Thursday, as affiliates’ delegates convene for official business in the AOA House of Delegates.

In his address to delegates at the 125th Annual AOA Congress during Optometry’s Meeting® in Chicago, AOA Executive Director Jon Hymes spoke to the strong state of the organization, its high standing among members, the profession and the American public, and future opportunities for growth and continued advocacy.

“The AOA brand is strong and it is a tremendous member benefit,” Hymes said. “Our priorities are moving forward, our support is growing, our influence is increasing, our leaders are bold, decisive and highly accomplished. Optometry is advancing.”

“In a diverse and changing profession, through difficult, divided and hyper-partisan times in our country, through historic economic disruption, stagnation and inflation, through rapid advances in health technologies, through practice acquisitions, consolidation and new care models, through battles with those who would diminish, deny and derail this profession, AOA members are unified in at least one key regard: In overwhelming numbers, they support, believe in and want to be connected to their state and national organizations,” Hymes told delegates.

While emphasizing the AOA’s already strong membership, Hymes noted that redoubled efforts to reach nonmembers through a sustained, consistent dialogue will continue through AOA’s membership campaign, United in Possibilities. These efforts will support and bolster states’ specific outreach programs, in collaboration and coordination with state associations. Additionally, the AOA continues discussions about the importance of membership with large practice groups.

"This is the new standard, and we’re absolutely in discussions with other groups urging them to make this type of commitment to a strong profession,” Hymes said.

Building on Hymes’ morning remarks on the state of the association, AOA President Robert C. Layman, O.D., delivered an address to delegates where he recapped his “vision” for optometry as originally outlaid in his presidential speech at Optometry’s Meeting 2021; namely, successfully equipping and inspiring doctors to practice full-scope, contemporary eye and vision care, preparing the next generation of 21st century advocates to be better leaders in their spheres of influence, and building understanding and respect for optometry’s vital contribution to nation’s health among the public and health policy decisionmakers.

“How did we do? Well, your team AOA worked tirelessly to overcome restrictions, cancellations and uncertainty to deliver championship-quality results,” Dr. Layman said.

Among those results, Dr. Layman noted:

He added: “Through it all, AOA has provided resources, along with hope and a vision for the future. We've protected it. Now let’s shape it. Our essential and expanding role in the health care landscape will continue to require fighting burdensome regulations like good faith estimates and antiquated prescription verification requirements.”

In closing, Dr. Layman encouraged delegates to help elevate colleagues into leadership positions and build the future of the profession: “There’s more gas in the tank to participate in AOA’s bright future! Let’s keep the momentum in the year ahead.”

Bo Keeney of the Virginia Optometric Association (VOA) was honored with the 2022 Virgil Deering Award for executive director of the year. Keeney was an integral part of passing Virginia’s recent scope advancement bill, as well as providing key leadership development and strategic planning for the VOA. He will become president of the International Association of Optometric Executives in 2022.

Stay in the know from the profession’s premier event by following Optometry’s Meeting and the AOA on social media, and follow daily news updates at aoa.org/news. Want to join the conversation? Use the hashtag #OM2022 and see the buzz on our live social wall.

AOA elects new Board of Trustees, approves resolutions, as Optometry’s Meeting® 2022 wraps up

The four-day 2022 Optometry’s Meeting® kicked off Wednesday with celebration of members of the profession, innovative educational opportunities and a call for advocacy for scope expansion in states.

The Russia-Ukraine war may spawn a cyberattack on American soil with government officials warning major industries, including health care, to brace themselves. How can you prepare?